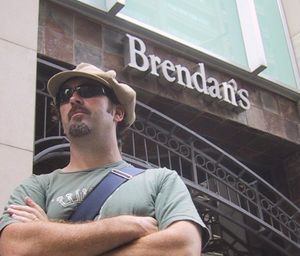 Thinkin' about summer.... Meanwhile lots of gigs going on - solo festival shows, THE PINKS, DAVE MASON with REEL B!G DOG, dead marines and some rare Karma County performances later in the year - check dates page for more. In September I'm producing a new Bernie Hayes album, nice one. Over the last several months I've been working behind the scenes on an EP recording with the great Jeremy Oxley for a documentary about his life aptly called The Sunny Boy. It's been a real treat working with JO, a gifted musician in any era.

And still I'm endeavouring to polish off my own new double album Wine Island before the end of the year... it'll be worth it, trust me, I'm a musician! See youse all on the mean streets... Brendo